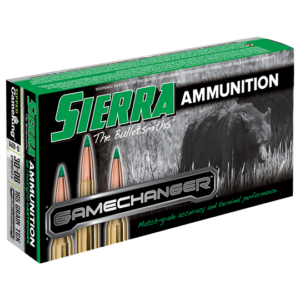 Hello again, I’m following a different path this post. Instead of following up on the bullet expansion from the 357Mag, I wanted to share what I found out about my Sierra 30-06 TGK ammo and get back to the pistol bullets next time. This is our A4669-06 TGK ammo using our 165gr Tipped GameKing bullet in the 30-06 cartridge in an expansion test. As you recall, the last post from Gary was accuracy potential from this ammunition so I felt this was fitting now and I’ll also comment on my last post. I mentioned the jugs were 4+” (and they are) but measure more precisely at 5.5” to 6”, flat to flat. This will give you a better idea of penetration. The expansion was spot on and made a fantastic mushroom. The impact was at 2,500fps and if we were to use the advertised 2,800 fps muzzle velocity as a starting point, that puts it at 170 yards. The first two jugs were demolished completely and a jacket fragment that only weighed 6.6 grains was by sheer luck found in the third. The main remainder of the projectile (see photo) weighs 105.7 grains and was found in the fifth jug. That is 22+” of penetration so it should exit a whitetail easily. In fact, I would consider this ideal performance for elk sized game or even some species of bear with proper shot placement. Pigs won’t stand a chance against it so dust off that old 30-06 Gramps gave you way back when and go have some fun shooting.