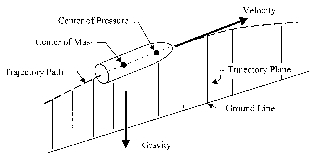 To visualize this situation refer to Figure 4.2-1, which is Figure 4.1-1 viewed from directly above the bullet. Note that there is no wind acting in Figure 4.2-1. The principal trajectory parameters are displayed with the correct relationships for a bullet with a right hand spin. The velocity vector V is in the trajectory plane and tangent to the trajectory path. The aerodynamic force Faero is directed opposite to the velocity vector. The bullet has a spin angular momentum H that is directed along the longitudinal axis and forward for a right-hand spin. The yaw of repose is the small angle between the H vector and the V vector. This angle causes a small component of the aerodynamic force, called Fside, to act on the side of the bullet, and which can be thought of as acting at the center of pressure of the bullet. This sideforce creates a torque vector M on the bullet. The torque vector M is the vector cross product of the moment arm r, which extends from the center of mass to the center of pressure, and the sideforce Fside. The direction of the torque vector M is downward, that is, perpendicular to the plane containing r and Fside. The torque vector does not point exactly vertically downward, because of the inclination angle of the trajectory, but it is exactly perpendicular to the plane of r and Fside. angular momentum is directed horizontally in the direction opposite to Fside. This component is so small that it can be considered negligible compared to the spin angular momentum.

Because the sideforce Fside acts throughout the flight of the bullet, a horizontal (crossrange) deflection of the bullet will result. This deflection is generally small, but it can be noticed, especially by long-range target shooters. This is because the deflection increases as time of flight to the target grows longer. Usually the observation comes about as follows. A rifle is sighted in at point of aim, say, at 200 yards. Then the range to the target is changed to 400 yards. The shooter makes an elevation correction to the rifle sights for the longer range, and a sighting shot (or group) is fired. The shooter notices that the shot (or group) is deflected to the right (for a RH twist barrel) by a few inches, but there is no crosswind to account for this deflection. The shooter can apply a windage correction for the 400-yard range, and everything goes well at that range distance. Then, if the range is changed to 600 yards, the shooter has the same experience. A satisfactory sight elevation correction can be made, but shots will be deflected a few inches to the right, necessitating a windage correction even in the absence of a crosswind. The sideforce arising from the yaw of repose is the cause of this unexpected crossrange deflection of bullets. [Here we assume that the crosshairs in the telescope (and the adjustment axes) are aligned precisely vertically and horizontally, so that the sight adjustments are precisely vertical and horizontal.] Crossrange deflections occur also for bullets with left-hand spin, but the deflections are toward the left rather than toward the right. For a bullet with left-hand spin, the spin angular momentum vector is directed out of the tail of the bullet. To cause the bullet to rotate downward in pitch, an upward vertical torque is necessary so that the angular momentum vector will rotate upward. This in turn requires a sideforce directed from right to left across the trajectory plane, and this can result only from a yaw of repose angle to the left of the trajectory plane (a small, nose-left angle of the bullet as it flies). Consequently, the sideforce is directed to the left, and the bullet deflects in the crossrange direction to the left as it flies downrange.