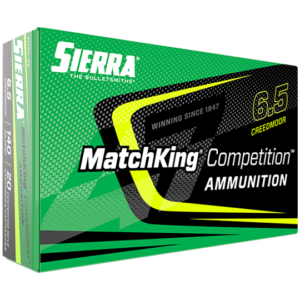 We’re excited to announce the release of our newest ammo line – MatchKing Competition Ammunition. This line combines the time-tested, legendary accuracy of the Sierra MatchKing bullet with superior components to create match-winning ammunition, right out of the box. Gold-standard quality, extremely tight tolerances and consistent accuracy and performance are the hallmarks for success, and this ammunition delivers on all counts.

“Our overarching goal at Sierra is to make the best bullets on the planet.” says Sierra President Keith Enlow. “For nearly 75 years, we have held to our tradition of unparalleled precision and consistent performance – first in bullets, and now also in ammunition. Our MatchKing Competition ammo will meet the demands of even the top handloaders and competitors that have been trusting Sierra’s products for years.”

The initial release consists of four cartridges – 223 Remington (69 and 77 grain), 6mm Creedmoor, 6.5 Creedmoor and 308 Winchester (168 and 175 grain). This ammunition uses the highest quality brass, allowing shooters to reload with their favorite Sierra bullet to get more time at the range.